I hope this finds you well and you have enjoyed the Easter weekend with more spring-like weather. Mr Birkinshaw has concluded Stage 1 of the examination and confirmed a revised schedule for Stage 2 with the hearings now commencing on 25th May 2022. You can find details of the programme and how it affects our campaign in this edition.

We are preparing our evidence to challenge the local plan strategy and the Capel sites, in particular, through this crucial stage of the examination. Many of you will have submitted personal representations at Reg19 and, if so, you can submit hearing statements to the inquiry on the Inspector’s ‘Matters’ that you had commented on. Please review the Inspector’s guidance carefully, you can refer to but do not repeat what you said at Reg19 in your answers to the Questions set by the Inspector. A separate concise statement is required for each Matter you wish to comment on and the deadline is 11th May 2022.

Our formidable team of planning barristers and consultants continue to guide us and are scheduled to represent Save Capel at the relevant hearing sessions. Our amazing community has been incredibly generous and our pledge scheme has been very successful. However, there are uncertainties on the eventual programme (for example, a second phase was added to Stage 1) and the level of funding required to best present our case throughout the inquiry. We therefore need further donations and pledges, with pledges only being called-in in an equitable way when the campaign really needs it. Please commit what you can afford to this crucial stage of the campaign.

With best wishes for a successful outcome, together we can win this battle!

Every Local Plan submitted by a Local Planning Authority (LPA) is reviewed by one, or two, Government appointed Planning Inspectors (PINs). The review takes place in two stages:

Looks at whether or not the Plan, as submitted by TWBC, is “LEGALLY COMPLIANT”, which takes into account:

Both Sevenoaks (SDC) and Tonbridge & Malling (TMBC) Councils had their Local Plans assessed as not being Legally Compliant as they had not fulfilled their DtC with their neighbouring Councils, and thereby, not able to proceed to Stage 2. It was our hope that the same would happen with TWBC’s Plan after the Stage 1 Hearing Days on 1st and 2nd March.

Save Capel’s Legal Team, and other petitioners against the Plan, raised doubts and concerns on a number of issues focused on the perceived failure of TWBC to fulfil their Duty to Co-operate, specifically:

In spite of numerous deficiencies, the Inspector allowed TWBC to provide more evidence, over three weeks, before coming back to a further Hearing Day on 29th March. TWBC managed to “magic-up” the SSWG missing minutes several days before the extra day’s hearing. The bigger issue was that suddenly on the morning of 29th March, we walked into the Council Chamber to be given a hard copy of an “updated” SOCG between KCC Highways and TWBC! The earlier one, submitted five whole months earlier on 1st November 2021, was very different to this one.

After a very frustrating day the Inspector concluded that the examination could progress to Stage 2. Importantly, the Inspector has not clarified that all aspects of legal compliance have been met – regardless of what TWBC are publicly stating – but he could have stopped the examination if DtC had not been met (as with TMBC’s examination).

This is a longer process which looks at strategic policies and individual sites in the Local Plan and whether TWBC have followed all their stated policies in relation to them. The largest sites of course are Tudeley Village, East Capel, and Paddock Wood.

The Stage 2 hearings were originally scheduled for 24th March to 27th May, but due to the protracted Stage 1 process, and possibly the current purdah that is now in operation until after the Local Council elections on 5th May, the Inspector has just released the outline timetable for Stage 2 which begins on 25th May and is scheduled to run through to 19th July. We will know whether or not the Inspector has found the Plan to be “SOUND” in his report that follows. 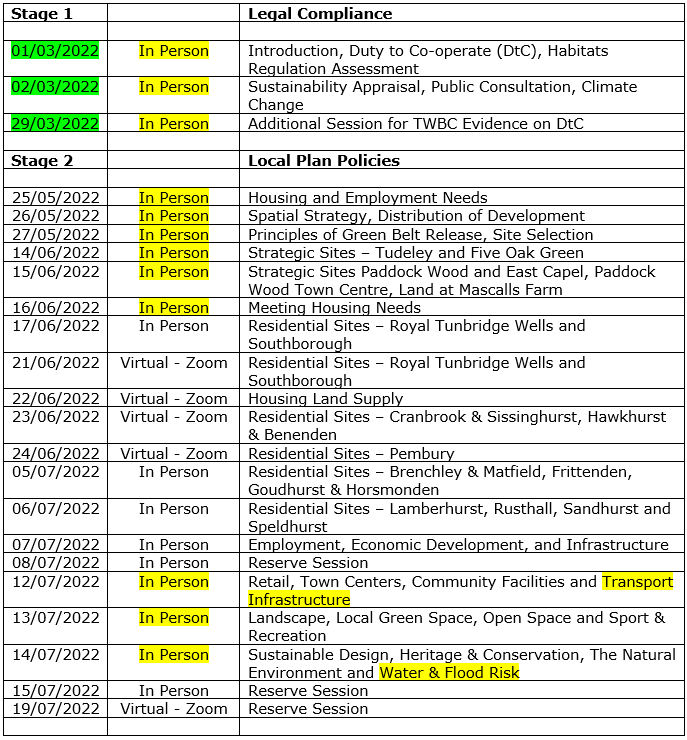 Save Capel now welcomes the opportunity to challenge the housing strategy and the Capel sites in detail. If we are successful, then it is much less likely that the unsustainable Capel sites will be included in a revised Plan. If it had been stopped at Stage 1 then the policies would not have been tested and TWBC could bring the same sites forward later.

And so, the fight goes on, where inevitably more funds are required to pay for the expert’s fees at this longer and crucial Stage 2. We have negotiated well with our experts, and they have also been generous in how and what they charge for, as a demonstration of their commitment to the Save Capel Campaign.

The next few weeks will be a watershed for our campaign. Any additional donations, or pledges, that you can make will be very important to our use of experts, and the greater likelihood of success which that brings.

In two weeks’ time, 16 of the Borough Council’s seats will be undergoing a local election.

Here is a link to a useful article by The Times of Tunbridge Wells which summarises the current state of play, the wards, and candidates for the local election on 5th May, and their analysis of what might happen. Parties fire the starting gun for crunch local elections | Times Local Newspapers & Magazines

Save Capel is an apolitical campaign, and we therefore offer no opinion on whether, or how, anyone should vote. Just for information, the key points are:

We are not alone! Across the Southeast of England, campaigns like Save Capel continue to challenge the loss of our green spaces, agricultural land and centuries of heritage and culture. We liaise with them, and in fact we are probably at the forefront in terms of giving them ideas to build a stronger, and more robust, response which the Government ignores at its peril.

Your Save Capel Executive continue to work tirelessly for our Campaign, analysing vast amounts of documents and data, preparing hearing statements, and working with our legal and other experts to ensure that we achieve the balance between “value for money” from your generous donations, and the chances that could contribute to our hoped-for success.

As ever, the Save Capel Executive would like to thank you all for your continuing support. If anyone is interested in contributing more to the campaign, especially by assisting with other fund raising, please contact us via email to savecapel@gmail.com